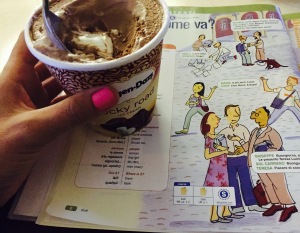 The work-week was long and intense.  My physical body was about to give out on Friday afternoon.  What kept it going was the mental image of a pint of Häagen Daz Rocky Road and a big spoon.  On my way out I wished my colleagues a good weekend.  When they asked about my plans…I didn’t give the answer a second thought.

“Eat a pint of Rocky Road ice cream and watch re-runs of NCIS, CSI or Law and Order…in that order.”

The good apple of the three 40-somethings said I should resist the urge, have some fruit and go for a run.  The one with more sense (divorced and lives life to the fullest) said I should save some Rocky Road for her.  She’s my donut-cravings confidant, the one who sends a happy face reply when I text a photo of the box of donuts in my car…on the way to the office.

The craving became stronger on Saturday.  I knew I needed that ice cream.  At the end of the day, after I had run errands and made frivolous purchases, I drove to the Winn-Dixie near my home.  I was in the pets aisle first and picked up those expensive little cans of cat food, some treats and two boxes of cat litter.  Then I stood in the frozen foods section.  I opened each of the tall glass doors and read the names of the flavors one by one.  There were two ladies (40-somethings, too) dressed in sweat pants and hoodies in the same aisle.  They smiled empathetically at me, as if saying, “I know how you feel”.  They discussed their options and chose two different flavors: double chocolate as well as mint chocolate.  I felt a connection to them.  It was Saturday night, the three of us had a worn look.  We wanted to be on our couches, wrapped in blankets and watching TV.  I could be wrong about them and their plans for the evening, but I’m pretty good at understanding people.

Satisfied with their choices the ladies left the ice cream aisle.  I stayed behind for a bit, still searching.  No Rocky Road.  I got in the check-out line behind the two ladies.   Some big, strong, good looking guy got in the same line behind me.  He had a twelve-pack of beer.  I laughed at myself (internally) and smiled at him; I probably looked so pathetic with…a shopping cart full of cat food, cat treats, cat litter…lettuce and kale (for the rabbit).  Oh well.

One of the ice cream ladies smiled and asked if I found anything.

I smiled and pouted at the same time “No, there isn’t any Rocky Road.”

“Oh but they have it!  It was one freezer over.  You must have missed it.”

She laughed.  I got a thumbs up and this response: “Now that’s commitment.  I like that.”

I found the Häagen Daz Rocky Road at Publix.  I also picked up a pint of Butter Pecan. It must have been one of those “hot-guy-at-the-supermarket nights”.  This time, not one, but two big, strong and handsome eastern Europeans were in the check-out lane next to mine.  My eyes locked with the eyes of the taller one.  Thankfully, I didn’t have a cart-full of cat food.  Although it might actually be alright this time…Europeans tend to be okay with cats.  The French loves cats, for example.

I don’t want to go way off topic…but…do you remember that scene in Batman Returns, where Michelle Pfeiffer comes home looking like hell after being electrocuted when she bites an electrical wire and transfers the current to another man?  She stumbles into her apartment, turns on her answering machine and the only messages are from her mom. She recklessly opens her fridge…pours some milk for her kitties…and drinks the rest straight from the carton.  Cat woman then proceeds to sew her own black vinyl costume.

Well, the scene at my house wasn’t that dramatic, mostly because I already have a cat woman costume and I don’t drink milk.  You can view my scene in the photo above.  I got home, fed the cats, grabbed my Italian Language book, crawled onto the couch, turned on the TV and had half the pint of ice cream.  Happiness comes in small pints.

PS- I forgot to mention the Sardines.  I had them for dinner…with the Rocky Road ice cream.  An unlikely, but quite uplifting combination. 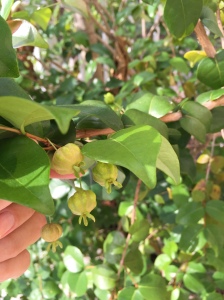 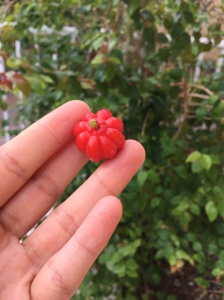 In Portuguese they are called Pitanga.  In English they are referred to as Brazilian Cherries or Suriname Cherries.  The bushes that produce these anti-oxidant loaded cherries are very resistant to disease.  They are often used as hedges and can grow quite tall.  When we were in high school, the public library as well as public tennis courts used these bushes as hedges.  During the hot summer months (July and August) we could play tennis and go to the library…and then pick Suriname Cherries.  It seems like people in the U.S. don’t eat these cherries, quite possibly because they don’t know what they are.

I planted a few seeds in different pots…then transferred the young plants to the ground…and they’ve become lovely large bushes.  The unripe cherries are green.  As the fruit ripens the color transitions from orange to red.  The deeper the red, the more sweet the fruit.  I usually like tangy fruits, but in this instance I prefer the very ripe, deep red and extremely sweet fruit.

Kahlúa Pecan Pie for breakfast
Hope your holiday weekend is light and fluffy like this Pumpkin Roll filled with cream cheese frosting.
For the thing I ❤️: @upurr_miami
Yes, it’s Monday. Hang in there, though. Friday is only 4 days away. Actually...3 days away if you don’t count today.
🍪Sea Salt, Browned Butter, Ghirardelli Chocolate Chip Cookies
Black Forest Cake🍒
Follow priscillakittycat on WordPress.com